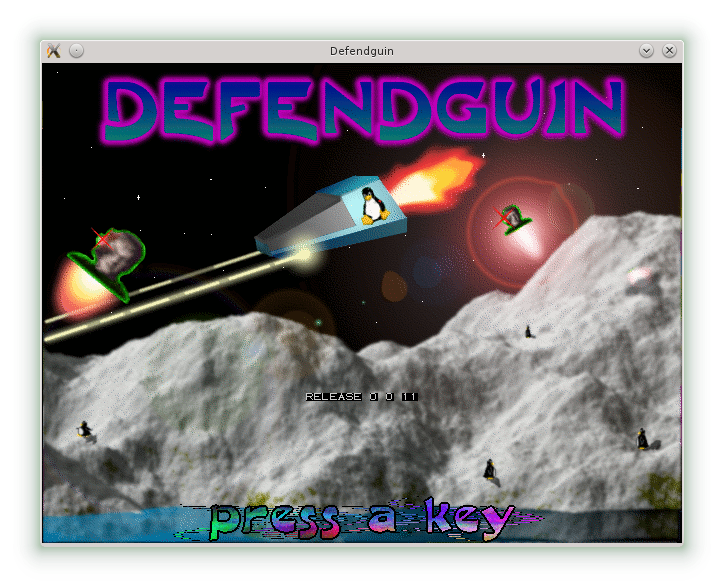 I’ve been reading “Ready Player One” by Ernest Cline. And yes, it has me thinking about classic arcade games. And no, this isn’t a book review. It’s about one game in particular.

Once upon a time, there was a rather popular arcade game called Defender, into which, over the course of a few months, I lost a lot of quarters to. In the game, you had to move a spaceship left and right, firing at aliens trying to abduct and enslave little astronauts who ran along the rocky surface. It was fast and it was fun. Defender spawned a huge number of imitators (or shall I say homages instead). If you happen to, like myself, be running Linux on your desktop, there’s a rather cool clone by Bill Kendrick, called Defendguin. The game pits our hero Tux against evil aliens bent on enslaving, assimilating, then mutating a planet of peaceful penguins into deadly penguinoids. These aliens, who look an awful lot like some guy named Bill, turns these helpless denizens into flying, killing machines. Once a penguin gets transformed into a penguinoid, there is no hope for the poor beast. Just blast it. Better yet, blast the alien intruders and get those points up.

The Defendguin site provides precompiled binaries for a number of platforms as well as the source code. To build Defendguin, you’ll need the SDL development libraries. I’m running OpenSUSE right now and although the game wasn’t part of the standard repositories, I extracted the binary, installed the SDL libraries, and off I went.

To play the game, run the command, defendguin and prepare yourself for a high-energy, fast-paced shoot-em-up. To get full-screen action, add the ” -f ” option to the command. And if you lose, you get to hear Captain Kirk say, “I don’t like to lose.”