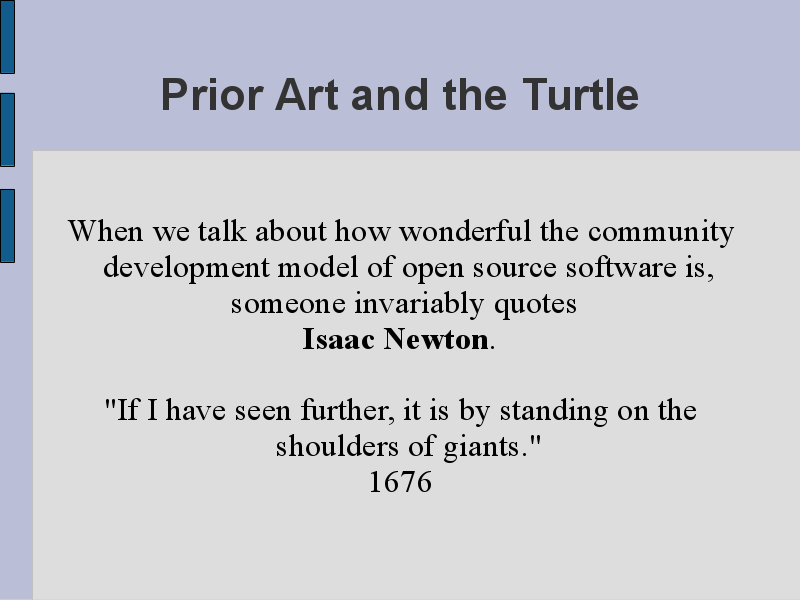 Way back in 2006, I gave a presentation that I titled “Prior Art and the Turtle“. It had to do with the development of open source software but it could apply to any number of human endeavours where we build on the work of those who came before us. I’ve attached the slides as images.

When we talk about how wonderful the community development model of open source software is, someone invariably quotes Isaac Newton from 1676.

“If I have seen further, it is by standing on the shoulders of giants.”

Let’s jump back in time to 1651 when a guy named George Herbert, writing in “Jacula Prudentum”.

“A dwarf on a giant’s shoulders sees farther of the two.”

“Dwarfs on the shoulders of giants see further than the giants themselves.”

Maybe that was the original. Except that just one year before, in 1621, Robert Burton, in “The Anatomy of Melancholy”, opined:

“A dwarf standing on the shoulders of a giant may see farther than a giant himself.”

Was that the original? Not a chance. In 1159, a somewhat more pedantic John of Salisbury, wrote in “Metalogicon”:

“Bernard of Chartres used to say that we are like dwarfs on the shoulders of giants, so that we can see more than they, and things at a greater distance, not by virtue of any sharpness on sight on our part, or any physical distinction, but because we are carried high and raised up by their giant size.”

Great. We finally have the original. But wait! In 1130, Bernard of Chartres said the following:

“We are like dwarfs standing [or sitting] upon the shoulders of giants, and so able to see more and see farther than the ancients.”

Who knows what source he was inspired by? I won’t go any further back but consider a more recent source, namely the band R.E.M. from their 1987 album, “Document”.

“standing on the shoulders of giants leaves me cold.”

So, what do you think? I’ll tell you what others think.

“I am, therefore I think.” – Friedrich Nietzsche

“I don’t think, so, therefore I’m probably not.” – anonymous

I started this whole thing by mentioning a turtle. What about that turtle?

Well, the story goes that Bertrand Russell once gave a public lecture on astronomy. He described how the Earth orbits around the sun and how the sun, in turn, orbits around the centre of a vast collection of stars called our galaxy. At the end of the lecture, a little old lady at the back of the room got up and said: “What you have told us is rubbish. The world is really a flat plate supported on the back of a giant tortoise.”

The scientist gave a superior smile before replying, “What is the tortoise standing on?”

Of course, I’ve heard versions of that story where Albert Einstein stands in for Bertrand Russle, so who knows? And so, in closing, this turtle will now acknowledge the turtles that inspired this presentation. Thanks to Marcus Bornfreund, founding project lead of Creative Commons Canada for inspiring me to do this. I saw him do a presentation where he pointed out that Newton wasn’t the first to talk giants. I also need to thank Wikipedia for all those “giants” quotes, information regarding turtles, and for just being there for me to use. Thanks also to Aerospaceweb.org where I found additional quotes, specifically the “I think” ones.

And thanks to you for sticking with me throughout this discussion of turtles.